The island on the edge

On top of all the red tape, our trip in Chukotka has now run into bad weather, and Providenya airport is closed. It’s midsummer, but the sky is cloaked in heavy cloud, which shows no sign of clearing, and the icy north wind has sent the temperatures plummeting to 8°C. My friend Victor Burstein informs us that in this part of the world you can even be grounded for anything up to five or ten days. Which is a problem in a province twice the size of Italy, almost completely covered in tundra with no roads. Here the only means of transport is the helicopter. We have come to the very edge of Russia to reach the island of Big Diomede. Called Ratmanova by the Russians, it lies slap in the middle of the Bering Strait, forty kilometres on each side from the mainlands of Asia and America, right on the International Date Line, where they will toast the arrival of the third millennium eleven hours earlier than in Italy. Hyped up by commercial ventures, the millennium festive fever has been raging in Polynesia since last year. The major tour operators and governments of the coral atolls have been vying to lure guests seeking the thrill of popping the first bottles of champagne, and so winning a place in the Guinness Book of Records.

In actual fact the first day of 2000 is only the beginning of the last year of the twentieth century, given that there was no year zero. The nice round figure of 2000 has, however, captured the imagination as a symbol for a new era.

The first people to enter the third millennium will be those on the Western edge of the Date Line, established by the International Convention of Washington in 1884. This demarcation between East and West basically follows the 180° meridian, but in some areas the line deviates to avoid splitting a country in two. If you go westwards beyond the Date Line, you add on a day, whereas by going the opposite direction you “lose” twenty-four hours and have to repeat the same day.

Only the islanders of Tonga, Fiji and Chatham will be able to admire the first dawn of the new year from their own country. The Kingdom of Tonga has attracted most interest. During the huge event planned for the new millennium’s eve, the 260 guests lodged in the Date Line Hotel in the capital of Nuku’alofa will be able to have their photograph taken in front of the sign proclaiming “Here, where time begins”.

The Republic of Kiribati, including the Gilbert Islands, Phoenix and the Line Islands scattered along the equator, resorted to a gigantic publicity stunt. With remarkable foresight, seven years ago the government moved its border for the new day 30° eastwards, that is by 1,600 kilometres. Overnight the natives of the Caroline Islands found themselves ahead of the others. This ploy of shifting the Date Line was immediately condemned by the authoritative Royal Geographical Society, the Greenwich Observatory, and many other geographical institutions.

A careful examination of the globe, however, reveals that the key place for the turn of the millennium is the little-known island of Big Diomede: 169° longitude West, where the Date Line swerves eastwards by as much as 11° towards the 180° meridian, thus avoiding Chukotka being divided into Saturday and Sunday. The furthest point east from Greenwich, this is where the new dawn will break. And here the celebrations will take place nineteen minutes before the islands of Tonga and forty-four minutes before Fiji. Our helicopter skims low under the thick ceiling of heavy cloud. On the right are the waters of the Bering Strait, on the left, the green tundra with low hills still capped in old snow. An hour and a half ago we left the town of Providenya and more recently Lorino and Lavrentya. According to our American map, we should now be over Naukan, but there is no sign of it. The pilot explains that the Eskimo village, built around 1400, was abandoned forty years ago.

We reach Cape Dezhnev, the easternmost Russian point, known in Europe as East Cape. At the centre of a rocky promontory, about 700 metres up, a white obelisk with a bust of the discoverer stands out from the cloudy grey background. The pilot veers round 120° and in no time we are above the majestic Big Diomede. At least 400 metres high, the sheer cliffs are inaccessible from the sea and the low rounded hills have patches of snow which won’t even thaw by the end of the brief Arctic summer. The wild land is only covered by a light carpet of lichens. There are no animals, only sea birds and puffins. There have been no inhabitants since 1947 when they were deported to the mainland to make way for a handful of military, brought in to defend the northernmost point of the island.

Our arrival is a special event for these men completely cut off from the world. Once the sight of a helicopter was fairly common. But now that Russia is in an economic crisis and no longer has the resources to sustain the army, helicopters only land a couple of times a year with food supplies. Life here for the twenty-eight soldiers really is tough. They are demotivated and what makes matters worse is that they are out there on their own, symbolically marking an almost meaningless border.

Gennady, a lad from the Moscow suburbs, should have finished his military service two months ago, but he is still here because the helicopter due to bring his replacement was grounded, first by bad weather and then because there was no fuel. “What do we eat?” He echoes my question. “Dehydrated potatoes, kasha (a kind of barley broth), dried fish and tinned food. Every now and then we can enjoy some lard. Fruit and vegetables? You’ve got to be joking, I can’t even remember what they taste like. In summer we pick a few herbs that grow in the tundra or gather sea bird’s eggs on the cliffs.” Not surprisingly most of the military personnel have various kinds of problems due to a diet very short in vitamins: infections, night blindness, toothache and acne.

The accommodation is terrible. They sleep in a squalid shack in dreadful conditions with no hot water and outdoor latrines. The dormitory is cold and it’s easy to imagine what it must be like in winter when the sun barely scrapes up over the horizon and the temperature is down at -30°C with polar winds howling over the island. But what is even more striking is the decay and mess: rusty old barrels and abandoned tools, broken windows. Giorgio Fornoni, our film director, who has spent most of his life filming in hot countries, can hardly believe his eyes: “it looks like a war has just ended”.

There is no question of any fun or entertainment. There is no leave and the soldiers never see their family during the two years of conscription. Free time is spent watching television only one channel with terrible reception. Anyone wishing to work out by training with weights in the improvised gym will burn up the calories, and they are never in any great abundance. So the favourite pastime is simply sleeping.

Only four kilometres of sea separates the island from the United States island of Little Diomede, less than three kilometres long. On Big Diomede it is Thursday, but over there, beyond the imaginary Date Line it is still Wednesday. Whereas the Russians on Big Diomede will be the first to see in the new millennium, the Americans and the neighbouring island will only raise their glasses twenty-four hours later. From the east coast you get a good view of Ingaluk, the tiny Eskimo village whose eighty inhabitants have tidily arranged houses, a little school, a shop and a Catholic church.

From Big Diomede you can see the seaplanes or helicopters coming in to guarantee a decent way of life for the neighbouring islanders. In 1926, in this area the explorer Diamond Jenness found some remarkable items from the ancient Okvik Eskimo culture, dating from the third century BC.

Every now and then, an America submarine surfaces offshore, but no sirens sound, because no one believes in the enemy threat any more.

One of the soldiers asks why we have come. I try to explain that I wanted to explore and film the place where day begins. He stares at me incredulously, probably wondering if I have some fresh bread or an apple. But more likely, he is dreaming of the day when he will finally leave this forsaken island at the edge of the world. 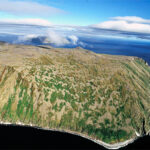 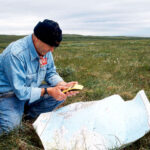 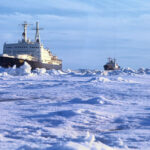 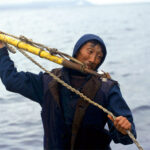 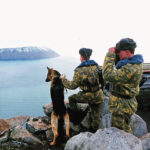 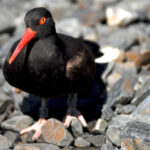 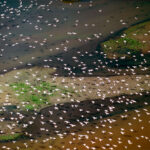 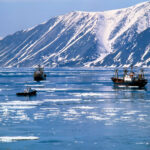 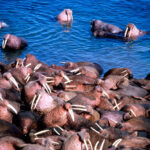 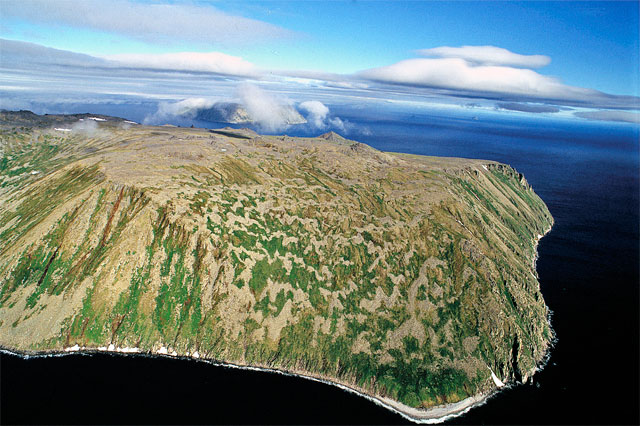 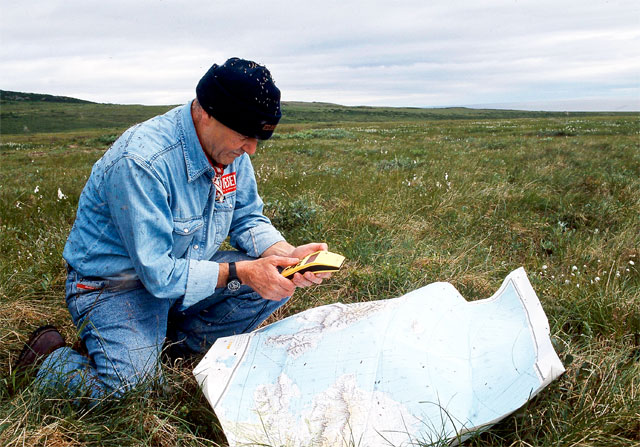 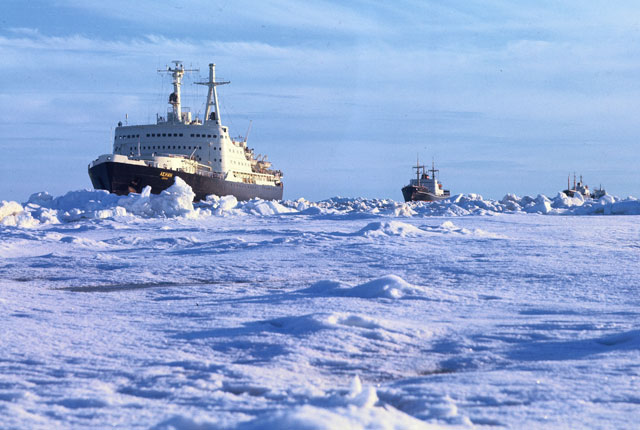 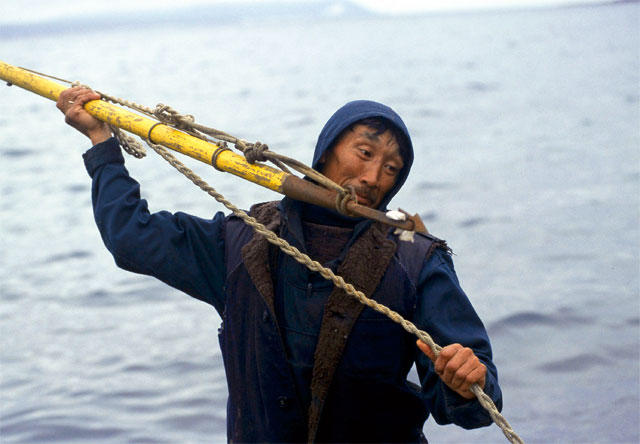 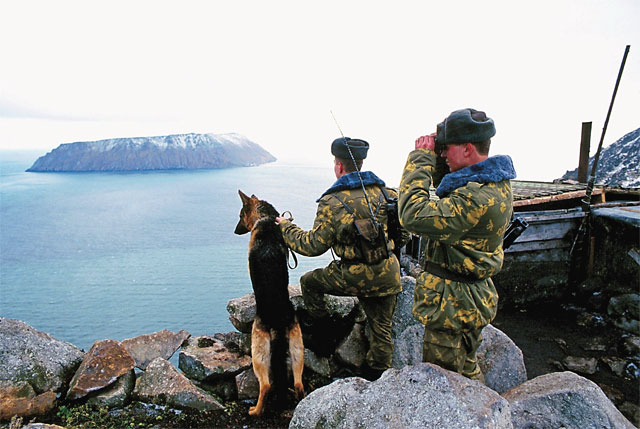 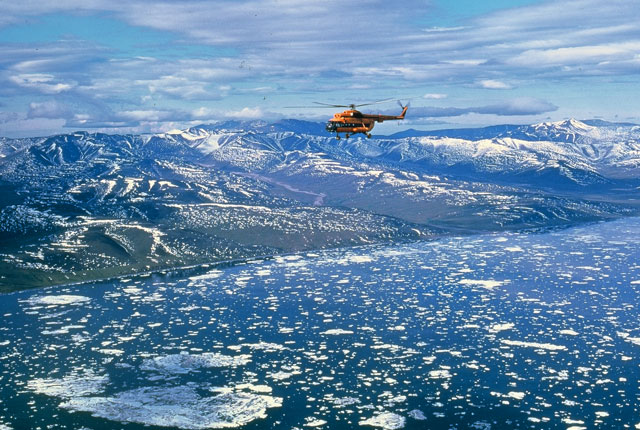 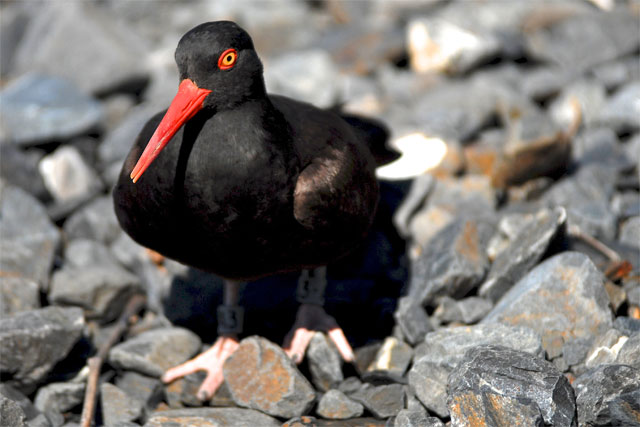 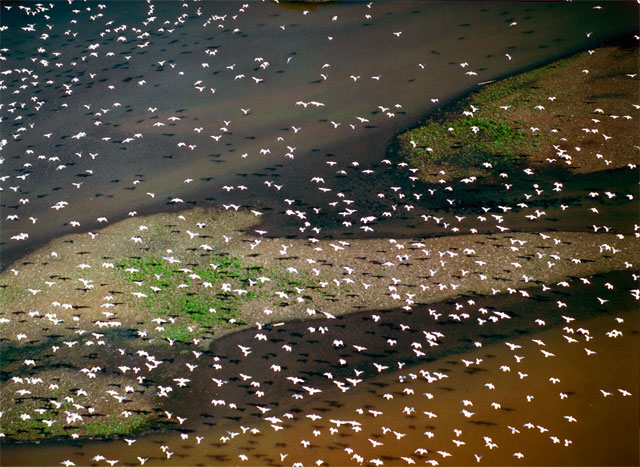 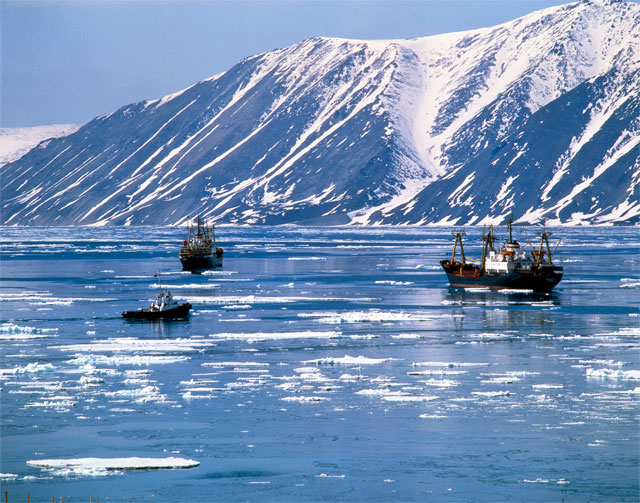 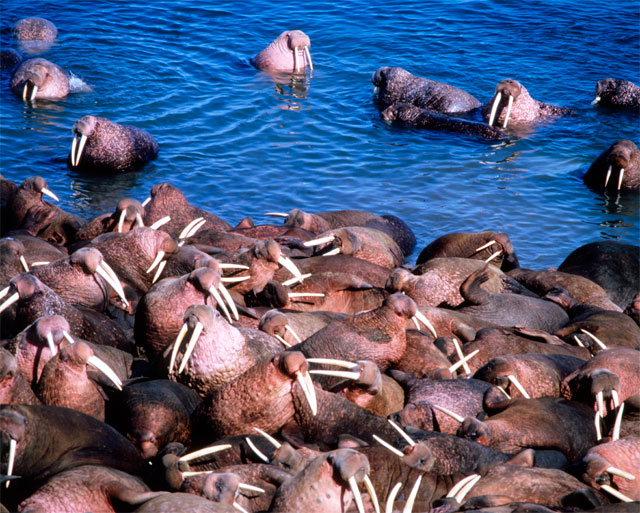 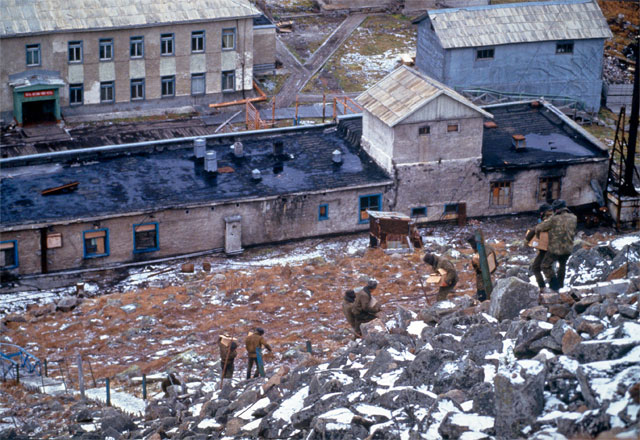 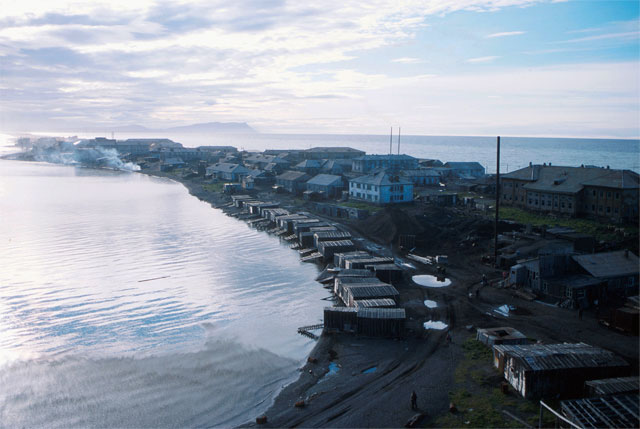 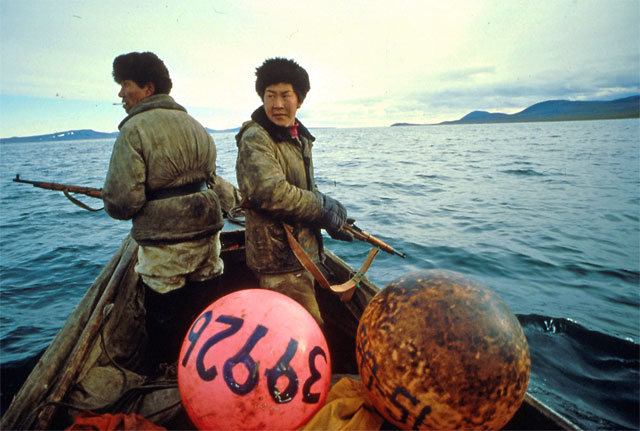 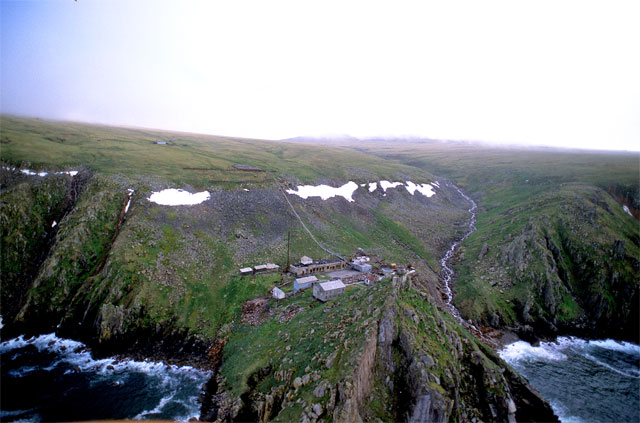 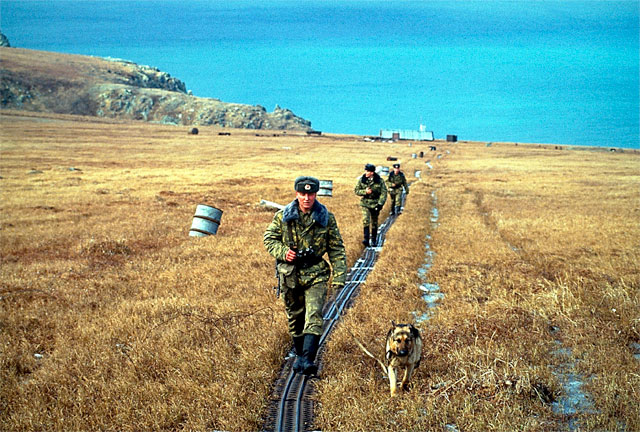 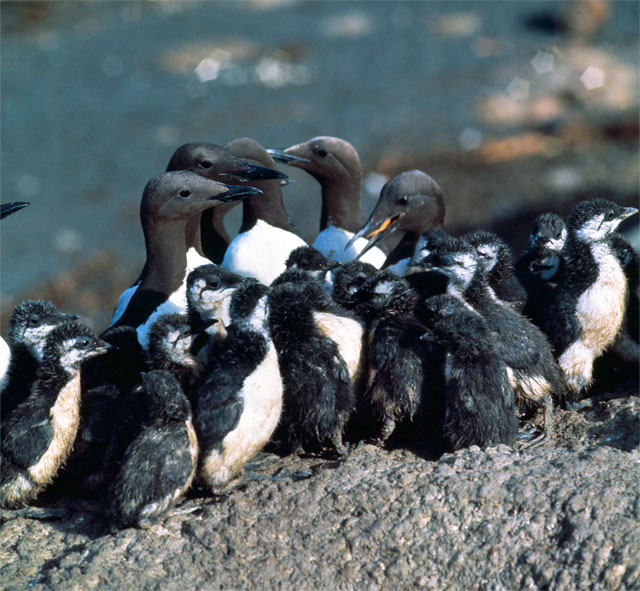